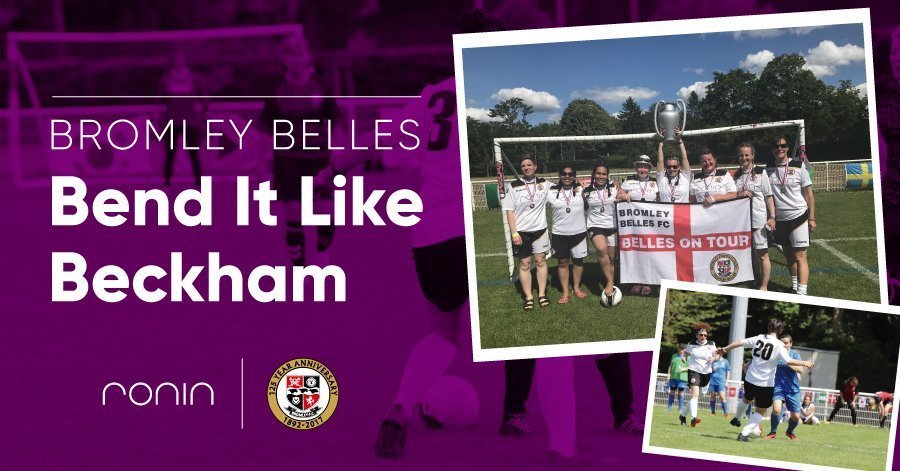 Women’s football is having its moment. With the continued success of England’s women’s team resulting in the Women’s World Cup’s slot on primetime television for the first time this year, people are more exposed to the women’s game than ever before and its popularity has surged.

All of this has been good news for local over 30s recreational women’s football team, The Bromley Belles, who made their own television debut last week on BBC London News. The Belles have recently returned from an overseas tournament, the first ever ‘Old Girls World Cup’, organised by Carol Bates from the Crawley Old Girls and Jo Treharne from the Canterbury Old Bags teams, to coincide with the biggest event in the women’s football calendar.

RONIN were delighted to sponsor the Bromley Belles kit for their trip to Soisson, France, where the tournament took place, so we were of course eager to find out how it all went when they got back. Founder of the team, Andrea, filled us in on the details, “The atmosphere was just brilliant! We stayed on the same campsite as the other English and Welsh teams and there were lots of activities organised for us outside of the tournament, so we got to socialise with everyone and get to know the other women there,” she told us. “One night we had a party with a beach bar, we did synchronised swimming together and played volleyball… everybody just got along so well.”

The tournament started with all the teams playing against each other throughout the day. In the evening there was a cup competition with four different teams – England, Wales, USA and Rest of the World – made up of the ‘best’ players, chosen by the manager of each team.

The Belles successes were numerous. They played four other clubs that day, with both Belles teams undefeated, Andrea’s team didn’t let in a single goal, and Ali scored a hat trick – a pretty impressive feat when each match only lasted sixteen minutes! When it came to the evening cup competition, four of the Bromley Belles played in the Round the World team, which Andrea also managed, and three were also picked to play for the England team, although unfortunately they had to withdraw because of injuries.

The decision to coincide the Old Girls tournament with the FIFA World Cup meant that the USA team – the Twisted Sisters – were able to combine their trip to France to compete in the tournament with a chance to catch the main event going on nearby. And it was worth the long flight as they actually won the overall tournament 1-0 to the England team after playing to an exceptional standard.

“The highlight was definitely the camaraderie,” Andrea said, “some of the Belles hadn’t been to a tournament before, so it was particularly great for them to have that experience. We played really well and are proud of what we achieved.”

And it looks like the Belles appearance on BBC London News has inspired more local ladies to give the sport a go. Andrea tells us the Belles have had ten new enquiries since their television stint, and she wants to encourage more women to join.

“If you’ve ever thought that you might enjoy playing football but feel like you’re too old or not good enough, don’t be put off. There are no barriers to playing for the Bromley Belles. We love the sport but the fun, friendship and laughter that comes from training and playing together is the most important thing for us.”

The next Old Girls World Cup tournament will take place in the UK during the Euros in 2021.

Want to know more about joining the Bromley Belles? Please get in touch with Andrea by emailing bromleybelles@bromleyfc.co.uk or follow their success on Twitter.