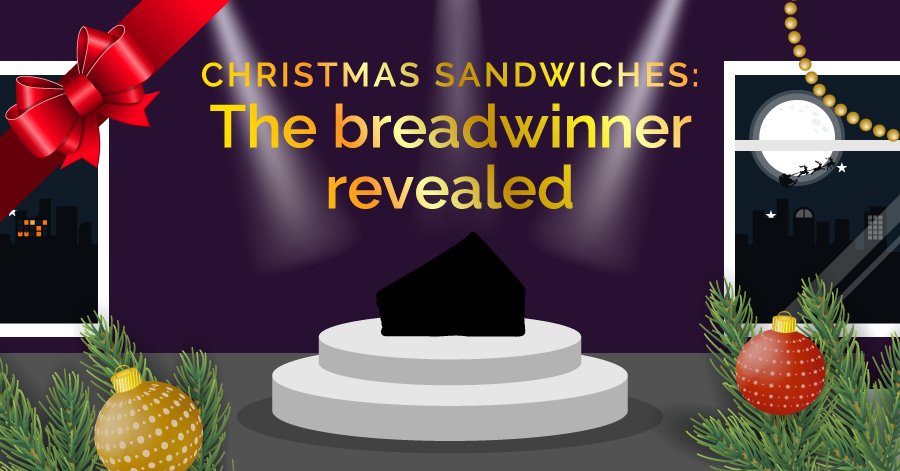 Ah, Christmas – ‘tis the season for fun, frolics and festivities and in 21st century Britain, is now marked by the arrival of Christmas sandwiches on our shop shelves. A prelude to the main event on Christmas Day and now as firmly rooted in Yuletide tradition as passing out in a post-dinner drunken stupor, Christmas just isn’t Christmas unless you’ve scoffed a festive sandwich (or twelve) in December.

Offering ourselves up as tributes, RONIN HQ tasted six Christmas sandwiches to find a one that ‘yule’ love. Our criteria included the festive factor, bread to ratio filling, quality of ingredients and general tastiness. 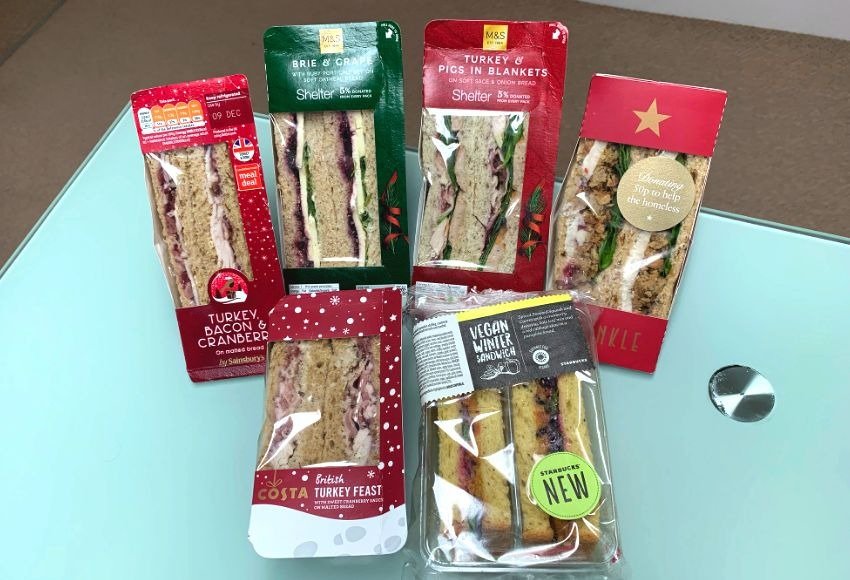 Read on to discover the breadwinner…

6th
Starbucks, Vegan Winter Sandwich [vg]
The best of a depressingly limited festive selection, the disappointment continued as the packaging unveiled two miserly proportioned rectangles. Spirits were momentarily lifted as the fillings brightened up the office – orange spiced roasted squash and carrot, with a red cranberry dressing & cabbage slaw and a green leaf mix – but were swiftly crushed. The heavily smokily-spiced veg left one reviewer making a comparison to tobacco, with the texture of the pumpkin bread simultaneously cloying and yet, mysteriously dry. Avoid.

5th
Sainsbury’s, Turkey, Bacon & Cranberry
The ‘biege’ of the Christmas sandwich world, Sainsbury’s Turkey Feast sandwich was not unpleasant, but it was distinctly unmemorable. It might sound 100% your type on paper – smoked turkey with a cranberry-port sauce and maple-cured British bacon on malted bread – but it’s a classic case of something being (much) tastier in theory than in practice.

4th
Costa, Turkey Feast
Edging ahead of Sainsbury’s by a crust, Costa’s offering was again, ‘fine’. A little lacklustre in terms of visuals – two small rectangles of malted bread – it was surprisingly well-filled with all the usual suspects; turkey breast, beechwood smoked bacon, sweet cranberry sauce, herby pork stuffing and a smattering of mayo, which provided welcome relief to a sandwich which verged on slightly dry. Acceptable.

3rd
M&S [v], Brie & Grape
Coming in at third place is the dark horse of the group – M&S’s brie, red grape and ruby port chutney on soft oatmeal bread. Initially met with narrowed eyes, the suspicious whispers turned into soft murmurs of appreciation as our Taste Test Crew chowed down on this unusual Christmas combo of creamy cheese, crisp grape, and tartly sweet chutney. A vegetarian Christmas sandwich in the top three? Yep, you better brie-lieve it.

2nd
Pret a Manger, Christmas Lunch
In a shocking defeat, the uncontested King of Christmas Sandwiches has lost its crown –although only by a crumb. Coming in at second place, Pret a Manager’s ‘Christmas Lunch’ is undisputedly a firm festive favourite. Crammed full of high-quality ingredients, it has all the makings of a Christmas Dinner compacted between two slices of pillowy soft malted bread and layered in an accordion of festive colour. Thick slices of free-range turkey are coupled with a port & orange cranberry sauce, herby pork stuffing, baby spinach leaves, and finished off with dab of mayo and a dash of crispy onions.

And as Pret donates 50p to help the homeless from the sale of each sandwich, we’d encourage you to get chomping.

1st, The Breadwinner
M&S, Turkey & Pigs in Blankets
As the creators of the first ever prepacked sandwich, it’s only fitting that M&S is the breadwinner – albeit by a single point. Packed with a hefty layer of succulent turkey, a smattering of peppery sausages with bacon, greenery and a generous slash of cranberry sauce, it’s a beautifully balanced Christmas creation. Our taste tasters were lost for words – mainly because they were busy relishing every last (very meaty) bite.

Plus, five per cent of each purchase goes to charity, so we’ll take six, please.