Customers or fans – you decide 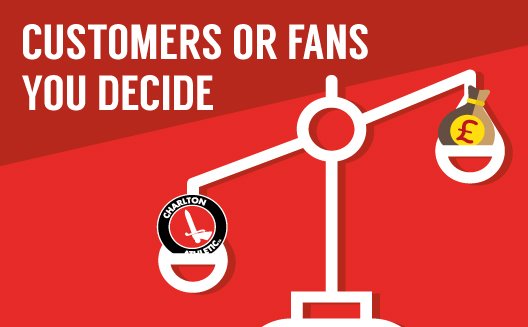 01 Jun Customers or fans – you decide

Posted at 09:44h in Blog by Steve Lipscombe
Share

As a (suffering) fan of Charlton Athletic Football Club (CAFC) I was interested to read the coverage in the Daily Telegraph sports section of the newspaper’s ‘Business of Sport conference’. Katrien Meire, the chief executive of CAFC, was in the audience. She posed the question to the panel, ‘Why do you think the [Charlton] club is not properly run’.

I don’t know if she was challenging the notion or was genuinely looking for answers. Either way the club has just been relegated to the third tier of English football after a disastrous two years under the ownership of Roland Duchâtelet. Meire has been the subject of some pretty unpleasant personal attacks, which I am not a supporter of.  However, be it bewilderment or denial, it doesn’t alter the fact that as chief executive, the club’s fortunes are ultimately her responsibility (assuming Monsieur Duchâtelet isn’t keen to receive the buck from her, which he very probably should).

Meire apparently blames the media for the ‘fractious relationship [with fans] focusing on off-field disharmony and not enough on the field of play’. A curious defence given the club’s relegation to League One after just nine wins from 46 games, resulting in a second from bottom finish.

That’s alright then. You can only agree with the latter part of this statement but to articulate it in all sincerity, as a secondary issue compared to investing in the community, is little short of lunacy. [Lack of] footballing success is the key performance indicator for her business. Everything else is rearranging the deckchairs on the Titanic. Herein lies part of the answer to her own conundrum as to why she is finding it difficult to engage with the club’s supporters.

Meire has also expressed some sort of resentment that ‘in English football, it is the owner who increasing carries the can for events on the field’. I wonder who she would expect to get the credit if Charlton was looking forward to Premiership football next year instead. An apparently humble and certainly low profile, passionate fan of football, Mr Vichai Srivaddhanaprabha would be a good man to ask about these things.

By definition, the blame and glory both lie with those who are genuinely responsible. If, as in the case of Mr Srivaddhanaprabha, responsibility for the players’ performance on the pitch is handed to the manager, then the manager gets what’s coming, and Claudio Ranieri has got his just desserts.

In an earlier edition of the newspaper, former CAFC manager and club legend, Chris Powell, who was swiftly dismissed under Duchâtelet’s regime, said that whenever he put in a request for a player to fill a certain positon, rather than being given the authority and funds to recruit, a player from one of Duchâtelet’s other European clubs (apparently ill-equipped for the role) would turn up to training unannounced, looking as bewildered to be there as Powell was to receive him. If the owner picks the team, then there is nobody else to blame. They are accountable.

Things really started to hot up earlier in the season when Meire referred to Charlton fans as ‘customers’, which seemed to upset quite a lot of them; I’m not entirely sure why, other than in any other walk of life customers have a choice. Even Michael O’Leary eventually cottoned on to that. You could at the risk of derision, argue that football fans are no different because they can always support another club instead. Some do – my wife, who is a former Charlton season ticket holder but born and bred in Leicester, is a case in point. Ask her to name three Leicester City players and she says Gary Lineker, Peter Shilton and David Nish. We have agreed not to discuss it – but those fans who have been through the thick and the thin, are trapped by their emotional commitment to their club.

But let’s agree we are customers. Personally I will settle for that. I am a business owner myself and whilst that may put me in a minority among football fans, at least I can see it from the owner’s perspective in a way others might be unable to. Frankly it makes it even worse. It is a fundamental principle of business that customer satisfaction is the difference between success and failure. Customers have a right to get what they are paying for. To accuse them of being the problem is commercial suicide. This is no particular insightful business acumen by the way. It’s common sense and if you can’t grasp this as a business leader, you are most definitely in the wrong job.

Fans should be terrified of losing their owners, their manager and their players. Ask the good people of Leicester.  As a business owner looking for sustainable success, customer loyalty and endorsement are the elixir. I want my customers to be passionate about what we offer them and delighted with our performance. I want them to be afraid of not having us around. I want them to recommend us. In short I want them to be fans.  It’s my responsibility to make sure that happens.