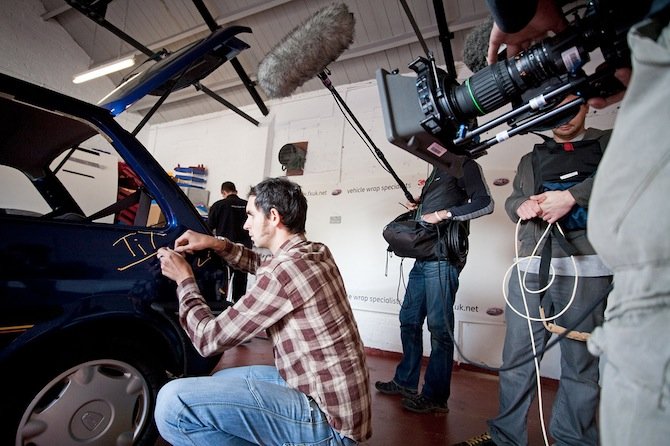 Later this week, on Channel 5, our client vehicle wrapping specialist, Creative FX will be appearing on popular motoring programme, Fifth Gear. So I thought now would be the perfect time to blog about our day filming with the Fifth Gear guys.

After seeing our publicity for the Audi R8 Creative FX wrapped in chrome for Sir Elton John’s White Tie and Tiara Ball, Fifth Gear approached them to do a feature for their petrol head series. And without giving too much away, immediately the producer’s thoughts turned to chrome. There’s no denying it’s a great material for transforming a car, and it certainly grabs your attention.

Something which really struck me, actually, was how fascinated the Fifth Gear guys were by the material. They had great fun messing around with the chrome vinyl in between filming; not just presenter, Jonny Smith, who spent a considerable amount of time applying the vinyl to different body parts, but the production team too. The sound guy tried relentlessly to wrap a plastic lid as smoothly as the car had been wrapped. Safe to say, he soon learnt it’s not as easy as the Creative FX guys make it look.

The car wrapped for the programme wasn’t quite up to Creative FX’s usual spec – their previous shoot involved wrapping a Ferrari F430 Spider. The old Rover Metro Tahiti, nevertheless, was treated with the same professionalism.“These guys are used to wrapping the top marques but even though this car is a bit of a laugh, it didn’t stop their dedication to the job and they’ve made it absolutely as good as it can be,” commented Jonny.

The car certainly looked better after the Creative FX guys had finished with it, so much so that Fifth Gear decided to auction it on eBay.

As if the PR opportunity wasn’t enough reason for the shoot, I had a great day. Our photography team filmed all the action for a ‘behind the scenes’ video (which, of course, we’ll be uploading to YouTube soon). Everyone was in good spirits, the Fifth Gear guys are really nice, down to earth people, and it certainly beat being cooped up in an office writing about car wrapping!

I can’t wait to see the programme go out now. It’ll be on channel 5 on Friday 28th October at 7.30pm if you want to watch it for yourself.