Happy New Year? It's up to you. - Ronin Marketing
20745
post-template-default,single,single-post,postid-20745,single-format-standard,bridge-core-2.0.5,cookies-not-set,do-etfw,ajax_fade,page_not_loaded,,qode-child-theme-ver-1.0.0,qode-theme-ver-19.2.1,qode-theme-bridge,wpb-js-composer js-comp-ver-6.0.5,vc_responsive

Happy New Year? It’s up to you. 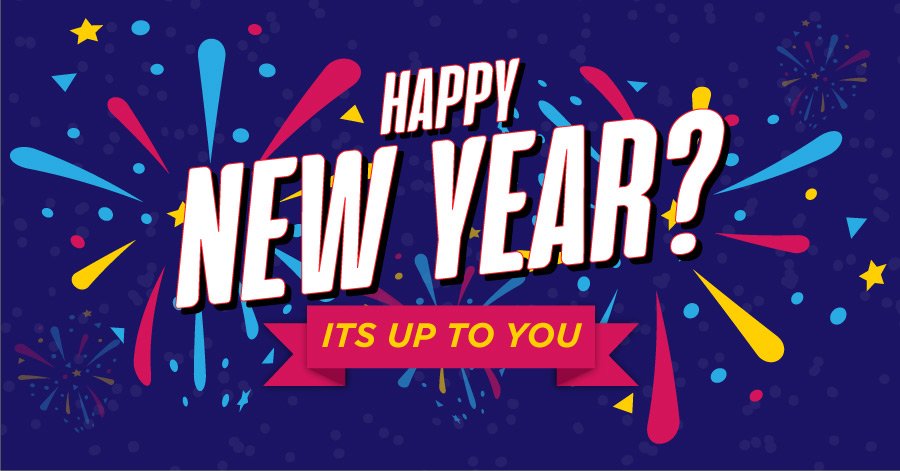 After a 2018 full of change and uncertainty, here we are, heading into the New Year wondering what 2019 will hold.

We don’t seem to be any clearer on whether there will be a Brexit deal, and if so, what it will look like – there’s ‘a 50:50 chance of Brexit happening if Theresa May’s deal is rejected by Parliament’, reported one newspaper over Christmas; so that’s clear, then. The same newspaper featured a story on shares slipping ‘deep into the red on a gloomy start to 2019’ – and one that said, ‘British shares are cheap, so it’s time to jump in’. It also reported that Britain faced a far worse situation 40 years ago with the winter of discontent, so there is nothing to worry about. Jeremy Hunt says that Britain’s global influence shouldn’t be underestimated, train fares have gone up again with the promise (again) of an improved service, Sajid Javid changed out of his holiday clothes in under an hour and Jeremy Corbyn has got trendy new glasses.

So, nobody knows what will happen in 2019; just the same as every year. Until we took stock before Christmas, I was feeling a bit like Tottenham Manager Mauricio Pochettino, in that we’d had a good year at RONIN, but it didn’t really feel like it. We’ve had the usual churn; we lost a couple of clients through no fault of our own, but we’ve won some new ones through our endeavours, more than compensating for our losses. We had some staff changes, but we strengthened, and we became more efficient with our systems and processes, which has made a positive difference to our productivity and bottom line. Overall, our financial results for 2018 are pretty good.

The way business people feel is being influenced by the uncertainty itself rather than any real downturn. We tend to anxiously overcompensate, ‘just in case’, and the truth is that last year was just relentless hard work. Our clients were working hard, we were working hard to help them work hard, and in most cases they have also reported good results.

What this reminds me (not for the first time) is that hard work gets results – but only if you work hard on the right things, in the right way, at the right time. In our part of the marketing world, we focus first on the things businesses must attend to if they want to survive, never mind thrive. And even when – nay, especially when – times are tricky, these are the things you absolutely cannot dispense with. I am qualified to say this by the way, because I run a business myself and we take our own medicine. We all need a vibrant brand, a modern website, an effective social media presence and a high market profile. Yes, all these things cost a bit of money one way or another, but they are as essential as your gas and electricity supply; they are non-negotiable and the cost of not doing them is far greater. But just having a website and social media pages doesn’t make the difference on their own, you have to put them to work. The important thing of course, is to get a tangible return on investment and that’s where creativity and the generation of fresh ideas are so important. It’s the 10% inspiration that makes the 90% perspiration worthwhile. Without creativity, by which I mean ideas that generate business (if it doesn’t sell, it isn’t creative), working hard will be fruitless.

These days the results of most marketing activity are instantly visible; they can be monitored and measured in real time, allowing you to change tack if you need to before you’ve burned your budget. You can see your ROI as it happens – if it’s working, you can do more of it; if it isn’t, try something else. Equally, you can also instantly see the effect of cutting back; this can be a frightening thing. One client who were forced to reduce their spend last summer saw a 10% drop in website traffic in a single month and the rate of decline is accelerating. Theirs is an occasional purchase – once every five to ten years – so they are keeping a close eye on things because they recognise they risk losing business if things continue in the same vein. It is an absolute certainty in today’s world of instant gratification, that as soon as you stop giving customers a reason to visit your website or social media pages, they will forget you. And it will take months to recover their attention, never mind their custom. The decisions we make now will shape our fortunes for the entire year, and beyond.

So this year, we are all well-advised to just crack on – as usual. We’ve been here before. The economists say that whatever happens on March 29th the outcome won’t be as bad as the last recession. The politicians can’t help us, so no point waiting for them, but we can all work together to help each other. In 2019, we might just find that a little bit of inspiration and a lot of hard work will once again prove the (not so) magic formula for success.