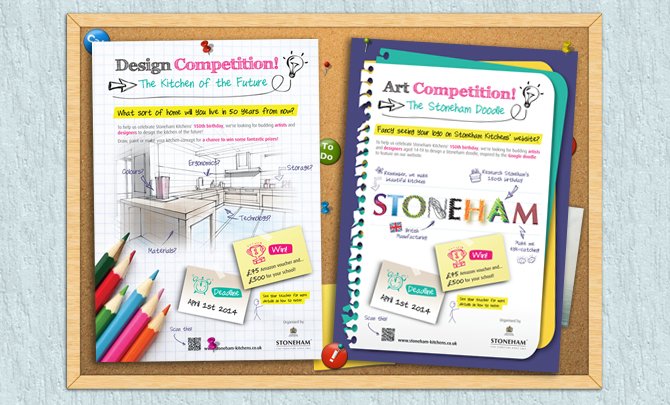 This year marks the 150th anniversary for our client Stoneham Kitchens, a kitchen manufacturer specialising in beautiful bespoke furniture.

As Stoneham’s appointed media agency, the landmark anniversary presented a fantastic opportunity for the RONIN team to get creative, produce some wonderful collateral and help the company celebrate in style.

And what better way to kick off its celebrations than with some fun competitions!

Open to local schools in the Bromley and Bexley Boroughs of London, the RONIN team worked closely with Stoneham Kitchens to come up with two inspiring ideas. ‘The Kitchen of The Future’ design competition invites students to draw, paint, design or make the kitchen of 2064, whilst ‘The Stoneham Doodle,’ inspired by the Google doodle, is a chance for students to get creative with the Stoneham logo and have their design feature on the website. Prizes for both include a £75 Amazon voucher for the winning student and £500 for their school.

To promote the competition our designers were tasked with creating two complementary posters that provided all the important information, whilst featuring a cool, crafty design to get students of all ages excited about the projects.

‘The Kitchen of The Future’ design competition, presented as if on graph paper, features a technical drawing of a kitchen with lots of questions inviting potential entrants to think about colours, technology and other kitchen components. The overall look is bright, eye-catching and as informative as it is fun.

‘The Stoneham Doodle’ poster is designed to look like pages torn from a sketchbook, and a bold redesign of the logo takes centre stage, providing a colourful example to encourage students to get involved with the competition.

The anniversary celebrations are supported by a social media campaign on Facebook and Twitter. Plus, we’ll be keeping Stoneham’s Pinterest boards full of colour combination and design inspiration for entrants to check out.

Adrian Stoneham, Managing Director of Stoneham Kitchens loves the design: “We think the posters will inspire local students to get excited about kitchen design and the British manufacturing industry. It’s a big year for Stoneham Kitchens and we’re excited to start our celebrations in style!