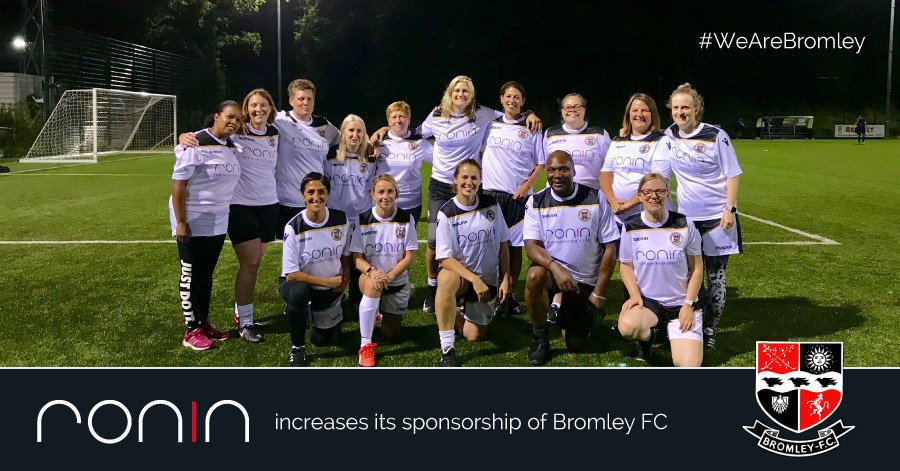 Here at RONIN, we are delighted to announce our increased sponsorship of Bromley Football Club. We are now a main shirt sponsor of the club’s youth teams, the beloved Raven mascot and the Bromley Belles – Bromley FC’s new recreational squad for women over 30.

As part of our sponsorship of the young players, a total of 36 teams with players aged four to twelve years (over 500 players altogether) will proudly wear Bromley FC’s signature white tops with RONIN’s branding emblazoned on the back. In addition, RONIN’s sponsorship of Bromley FC’s Raven mascot has been renewed for a further season, making this the fourth consecutive season that we have supported the club’s feathered friend. Finally, this will be the first season that we support the Bromley Belles, the latest team supported by Bromley FC established in March 2018 which promotes fitness and fun for women.

Steve Lipscombe, Director at RONIN Marketing, commented, “We are delighted to renew our sponsorship to support the Bromley FC Junior teams and RONIN the Raven, and are especially excited to support the Bromley Belles. We are proud to promote a recreational group that encourages women from all backgrounds to get involved with sport, socialise and take a break from regular life.”

Jeff Hutton, General Manager at Bromley FC, added, “Steve and the team at RONIN have been fantastic supporters of our efforts to reach out into the local community over the last few years, as well assisting us with some stellar design work in the lead-up to our game at Wembley Stadium earlier this summer. We’re delighted to be working even closer together this season as they help support the Bromley Belles.”

The Bromley Belles meet every Wednesday for practise at Bromley Football Club from 8.45pm.