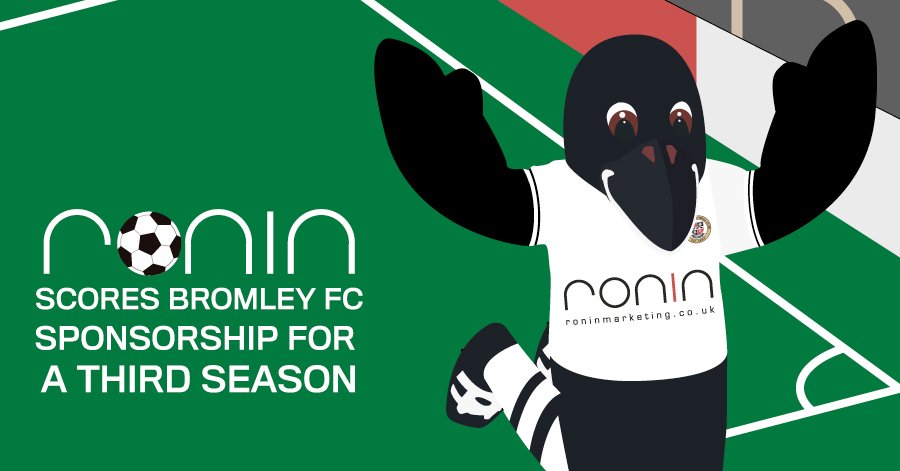 RONIN are thrilled to announce that we are extending sponsorship of our local football team, Bromley FC, for the third consecutive season!

We have loved being able to support the club over the last couple of years, in particular the Bromley FC Junior teams, who will continue to sport the RONIN logo on their team kits through the next season. You may have spotted the team mascot, the RONIN Raven, out and about in The Glades and at the stadium grounds, and this has been something we have been proud to introduce, as part of Bromley FC’s work in local schools, encouraging the younger generation to get involved in sport.

Another highlight of our sponsorship of the club over the past year has been the opportunity to support the women’s over 30s recreational football team – the Bromley Belles. The team was set up by Andrea Ellis in March 2018 and has already proved a huge success, attracting over 30 players to make up two teams.

The Belles recently hit the big time with an appearance on BBC News, where they spoke about the increasing popularity of women’s football and their participation in the Old Girls’ World Cup in France. We were delighted to be able to help fund their trip through the sponsorship of the team kit – in fact, you may have spotted our five minutes of fame when they appeared wearing it on the BBC in June. You can read more about the Bromley Belles recent success at the OGWC in our blog here.

It has also been great to see the significant investment made into developing the club facilities at Hayes Lane in recent years. These include the installation of a new state-of-the-art FIFA quality stadium pitch, and the newly opened Glyn Beverly Stand – providing an additional 1,450 seats and community hub for use by local Bromley groups and clubs. Funding has also helped facilitate the new partnership between the club and Ravensbourne School, with 100 scholars helping to deliver an educational football programme to students on site, starting next month.

For the Bromley FC first team, successes in the pre-season friendlies have bode well, with five wins in seven games! We are excited to see how they will do in the upcoming 2019/20 season, which kicked off on Saturday 3rd August with a draw against newly promoted Chorley FC. Good luck to the Ravens!